John's mission is to give back to the game that has provided him so much in his lifetime, to be a reliable and supportive mentor for any youth that has an interest in baseball or softball. John is a graduate of Milton High School where he was a three sport athlete (football, basketball, baseball) Captain in 2002 for the baseball team.

After undergoing Tommy John surgery during his senior season at Milton, John moved on to Nichols College where he earned a degree in Business Management and was a four year starter for the Baseball team. John was named Captain in both his Junior and Senior seasons (2006, 2007) at Nichols, he was also named to the CCC All conference first team as a pitcher in 2006.

After college ball John continued playing for his summer team in the Yawkey Baseball League of Boston, the Al Thomas Athletics. He has helped develop and advance college baseball players each summer by creating a competitive summer program. He has since moved on to the Boston Park League, where he manages the Boston Athletics Baseball Club. John started his AAU coaching career five years ago and has called Dirt Dawgs home for three of those five seasons. 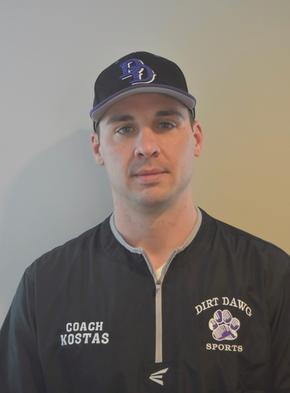